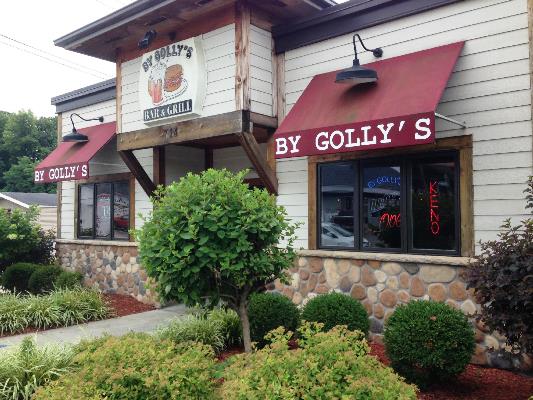 George and John were joined by Rod Gossett and Joe Hermann for a late lunch at By Golly's in Milford—a restaurant which, at 0.95 miles from the Trail, just barely met our one-mile-from-the-trail cutoff criterion.

By Golly's is essentially a low key, unassuming, modestly priced neighborhood place which specializes in "burgers and beer,” though they also offer comfort food appetizers such as onion straws, waffle fries and nachos. Salads and pizza, as well as heartier dinner plates, are also on the menu. The dining area is one large room with a bar in one corner; outdoor seating is also available. A number of lunch specials are offered, and each comes with a draft domestic beer. Full bar service is available. Perhaps half a dozen beers are on draft, with many others available in bottles. Domestic drafts are $2; craft beers $4.50.

When you walk in the door it’s not long before you realize that you probably shouldn’t take a seat at the bar, even if every stool is open. Each of those stools probably has the (unwritten) name of some local who finds their way there at various times of the day. Not a problem, though; there is plenty of seating at the tables. Looking around we saw at least 9 televisions, an outdoor patio, historic picture of Milford on the wall and plenty of local patrons having lunch. 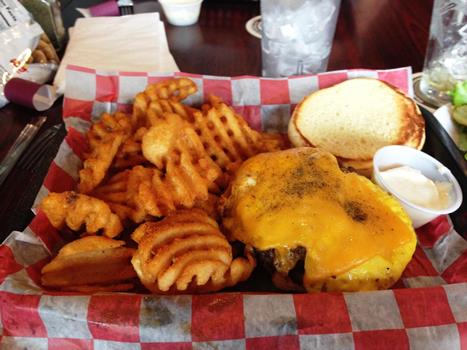 Rod chose a By Gollyburger -- swiss cheese, sautéed onions and honey mustard dressing. Joe got a chicken sandwich off the lunch specials menu instead of a burger. George took a Black and Bleu burger, blue cheese and New Orleans spices. All three were priced at $8.99. John, being more adventurous, selected the Sunny Day Burger topped with goetta (only in the Cincinnati area!), a fried egg and cheddar cheese, all for $9.49 (Tums and/or Pepto-Bismol available at extra charge). All burgers were cooked as ordered—medium rare, well done or whatever—which was a happy and refreshing change from the one-preparation-fits-all attitude exhibited by most chain restaurants. 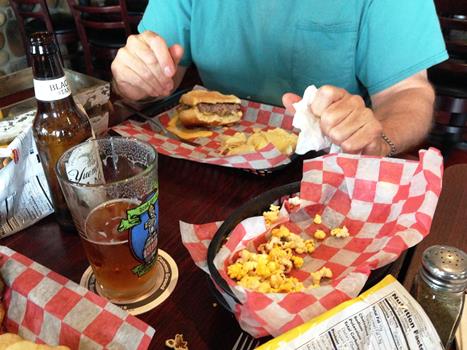 George’s food was mediocre, at best; the greasy burger just didn't sit well with him. John’s sturdier constitution seemed impervious to any grease issues, and he even reveled in them. However, some grease backlash hit later with a one-and-a-half-hour nap after he got home. Joe and Rod voiced no complaints, but neither did they offer any praises. As mentioned service was exceptionally slow, despite it being mid-afternoon when we ordered, and our waitress, while competent, was unenthusiastic. These factors, coupled with the lack of proximity to the Trail, would lead me to not recommend By Golly’s to Trail users; overall, I just can't see it being worth the almost two miles round trip from the Trail.

By Golly’s rates 2.5 bells out of 5. Don’t let this keep you from going, though. If you like the local bar atmosphere, and are looking for a variety of burger choices, then this is the place. Another positive are the prices. This lunch was 40% less expensive than a couple of other places we’ve visited.