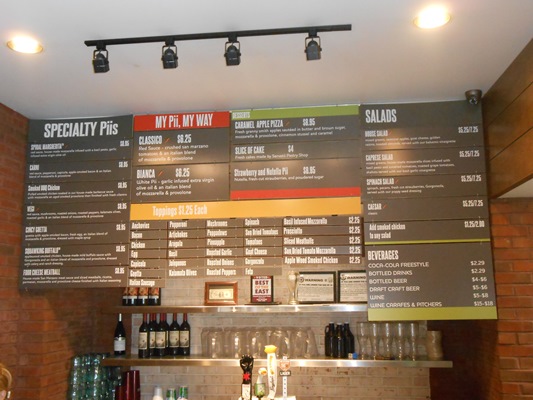 This week we visited Pizzelii Brick Oven Pizza, directly across the street from last week's 50 West, for lunch.  Their specialty is artisan brick oven fired pizzas, though they also offer salads.  Their crispy thin-crust pizzas come in just one size—12" (8 slices)—though they offer a VERY broad range of toppings, and a choice of red or white sauce.  They also offer 7 pizzas with pre-set toppings.

We made the cardinal reviewers’ mistake; we both ordered the same item on the menu, a red sauce "Carni" (meat) pizza with pepperoni, apple-smoked bacon and capicola (a delightfully unique crumbled and spiced ham sausage).  The sauce and cheese were perfect.  We agreed it was one of the best pizzas either of us had ever had—anywhere.

Ordering/paying is done at a central register where patrons also select their drinks.  Soft drinks, wine and beer are available.  Of the latter, four beers are on draft -- including a lager from 50 West right across the street.  They also have a nice selection of canned and bottled beers.  Having paid, patrons are given a tower with a number on it, and then they seat themselves. Each of our pizzas with a beer came to about $17 per person.  The pizza by itself is about $9 and is plenty for a hungry runner just off of a good workout. 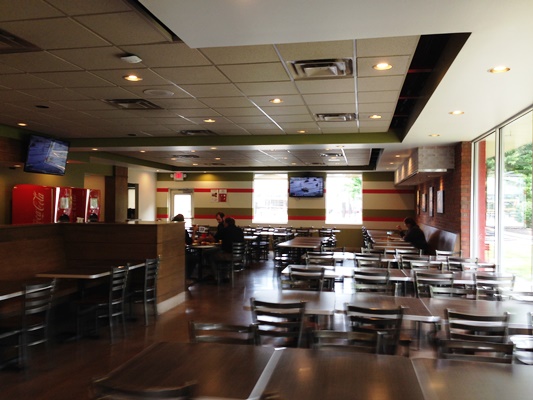 The kitchen is open to the dining room, so you can watch your pizza being made and cooked in the brick oven from your table while you wait.  With light traffic in the restaurant, the pizzas were delivered to our table in about five minutes.  Patrons are expected to get their own napkins and silverware and, if necessary, to-go boxes for leftovers.  As staff service is minimal, no tipping is expected.

The restaurant is bright and well lit, with minimalist décor. The noise level was extremely low on our visit, primarily because there were so few patrons.

To rate Pizzelii’s, I was initially going to knock it at least 2 dings for lack of service.  I like going to places where you can sit down and be waited on, but that seems a bit unfair.  Also, the pizza was so good. The place was clean, open and a nice atmosphere for conversation.  So Pizzelii earns a 4 out of 5.  One ding for the lack of service. 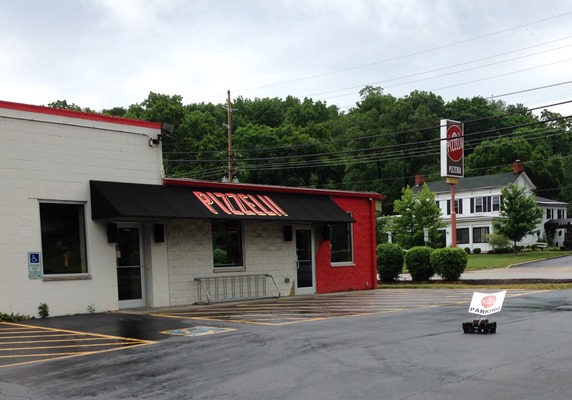 Both Pizzelii and 50 West are located at the far south of the trail.  This section, at the Newtown Bridge, is actually part of Great Parks of Hamilton County.  The Little Miami State Park starts around Avoca Park.  Based on data collected by the Friends of the Little Miami State Park, an organization we both volunteer with, there are at least 100,000 trail users going through that part of the trail each year.  There is a parking lot off of Newtown Road at Bass Island.  From there it is an easy third of a mile walk on the trail to either of the restaurants.

Worth noting is the 50 West Production Works right next to Pizzelii on the same side of Wooster Pike.  There are several sand volley ball pits, a grill and the tap room.  The Production Works opens at 4pm.  It looked like you could even rent canoes for a trip down the river if you wanted.

Final note on this section of the trail.  Just a little further down the road is Flipdaddys.  This is a Cincinnati chain, gourmet burger place.  I’ve been there before and it’s worth the stop, but it does not meet the no-chain criteria set out at the beginning of this adventure, so we will not be going there to review it.