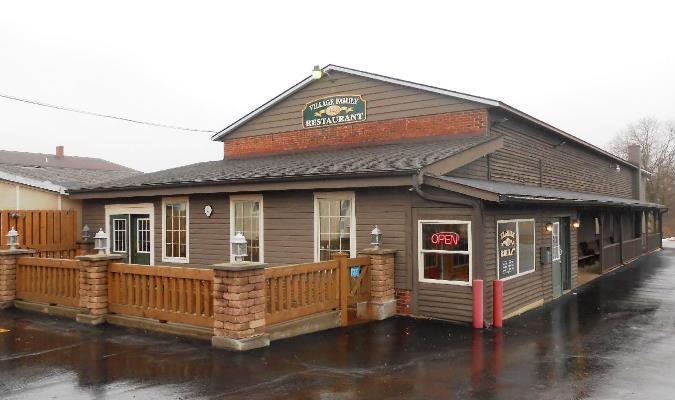 On February 14 the TTA Trio (John, Rod and George) celebrated (?) a stag Valentine’s Day by returning to Waynesville’s Main Street to have a go at The Village Family Restaurant (VFR), located adjacent to and behind Bentino’s Pizza.  As the name implies, VFR is, indeed, family oriented (read, “no alcohol served”) and it was almost completely filled by locals upon our noon arrival.  Its theme is “simple American fare,” with a three-page menu (dated 11/10/17) spanning breakfast, lunch and dinner served seven days a week.  Offerings include salads, homemade soups and pies, pizzas, subs, sandwiches, appetizers, numerous sides and a children’s menu, as well as lunch and dinner specials; there’s truly “something for everyone!” 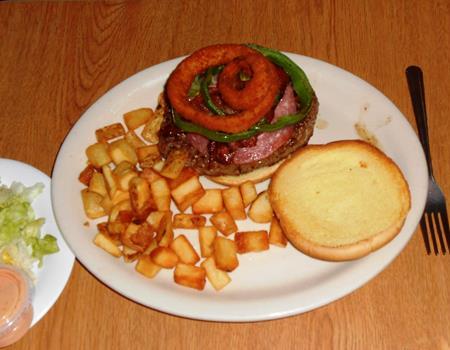 Despite VFR’s obvious local popularity, the TTA Trio soon found that the impressive breadth of choice didn’t automatically translate into a similarly high quality of food.  Deep fried mushrooms ($4.50) ordered for the table as an appetizer went down well; as it turned out, though, they were the high point of everyone’s meal.  Rod then opted for an Italian Stallion sub for $8.25 (ham, salami, pepperoni, sliced tomatoes, diced onions, banana peppers and mozzarella cheese topped with Italian dressing or pizza sauce) and was basically content, though not particularly enthused.  John’s $8.35 choice was an Uncle John Bacon Burger, a half-pound of beef with cream cheese sauce (!), salami, bacon, grilled green peppers on a toasted onion bun with Thousand Island dressing, lettuce, sliced tomato and topped with two onion rings.  He ordered it done medium, but certainly didn’t get it served that way, which was a disappointment. George was initially intrigued by the $10.15 Kickin’ Bison Burger (a third pound of bison meat topped by various spicy items) but, intimidated by the spices, made the “safer choice” of a breaded pork tenderloin on a bun with a side of onion rings for a total of $6.50.  This proved to be a serious error in judgment, as the tenderloin was the worst he’d ever had, and John and Rod further agreed with him that the onion rings had a strange "off" flavor that made them completely inedible.  There was consensus that everything served tasted pre-fabricated, despite VFR’s “home cooking” theme. 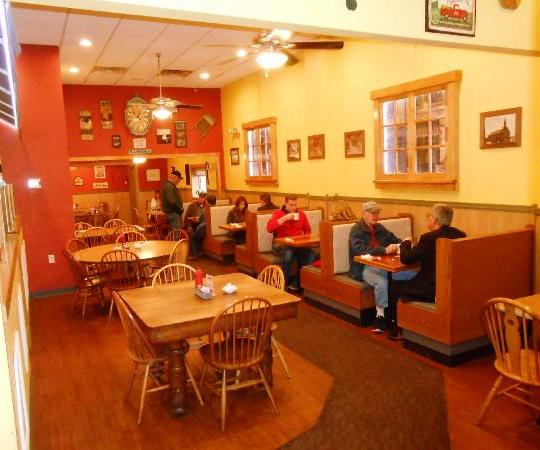 Ratings among the TTA Trio varied from Rod’s resigned 2 1/2 bells to George’s grudging 1 ½, with John's disappointed 2 falling right between.  Accordingly, the TTA Trio settled on a 2-bell rating, but completely agreed that there would be no incentive to return to Village Family Restaurant in view of other and better immediate options.