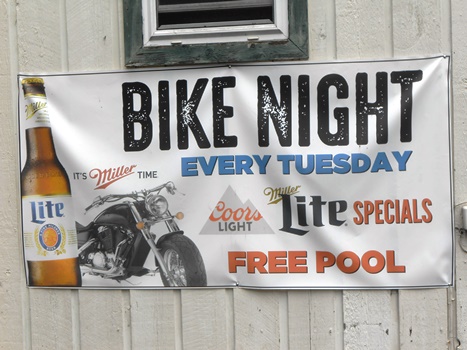 Well, it was bound to eventually happen: The TTA crew (John and George, accompanied by Joe Hermann and Fred Kindred) finally hit rock bottom when on September 13 their lunch adventures took them to The Rusty Nail, a motorcycle bar (AKA a dive) located in a late 1800s building in Miamiville just a few blocks from the Trail.

Despite having scouted the place two weeks previously, enjoying a beer there and being assured by the barmaid that customers could get burgers "any way they desired," neither John nor George (much less Joe or Fred, who made the sad mistake of believing we wouldn't lead them astray) were prepared for the absolute WORST eating experience since the very beginning of the TTA reviews! Since the place was just an unpretentious, dimly lit biker bar, staples such as relatively low priced burgers, fries, onion rings and appetizers appeared on the simple menu. All beers were bottled or canned—none on draft. Lunch patronage was exceptionally light, which should have immediately warned us. 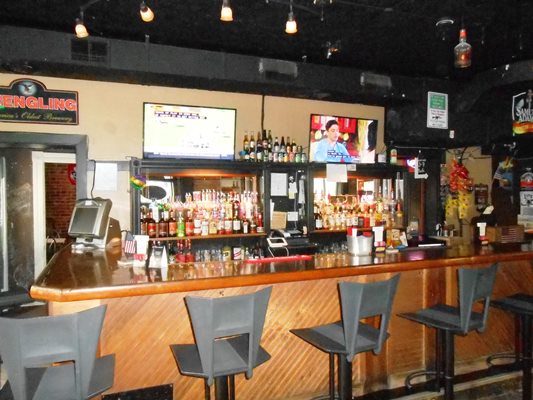 John, Joe and George all ordered a beer, while Fred chose a canned Pepsi. Had we known what awaited us, we would have prudently stopped there; but, no, we pressed on, and made the grim mistake of actually ordering food—which was the beginning of the long downhill slide. In keeping with the tone of the place, John, Joe and George ordered various types of burgers, but asked each be cooked to order. This flummoxed the poor waitress, who said, “Our machine (!) takes 8 minutes to cook burgers, so if you want them done differently, I'll have to do them one at a time." We told her we were willing to wait, but we did each want our burger cooked to order. Hearing this, Fred opted for quesadillas, and John asked for jalapeño poppers for the table (a decision he eventually came to regret on the drive home).

Indeed, it did take a while for the food to appear, so a second round of drinks was ordered. When Fred tried his quesadillas, he promptly commented, "I am totally underwhelmed!" The rest of us were initially pleased with the impressive size of the burgers served, but that was the last of the positives; we immediately agreed they were probably the absolute worst any of us had ever tried to eat. John did manage to finish his, but not Joe; George gave up on his after a few bites (he initially thought of boxing it up and taking it home to feed to some neighborhood dog, but then realized he didn't know any dogs he hated that badly). In fairness, George wasn't charged for his burger, which was probably the sole bright spot of the entire sorry experience. 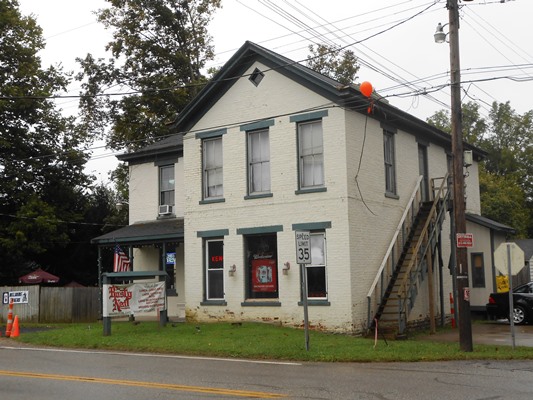 Bottom line: The consensus of the TTA Crew was that The Rusty Nail merits exactly ZERO bells, and Trail users should be warned away from the place. If you elect to go there, we recommend nothing be consumed which doesn't come from a sealed container.