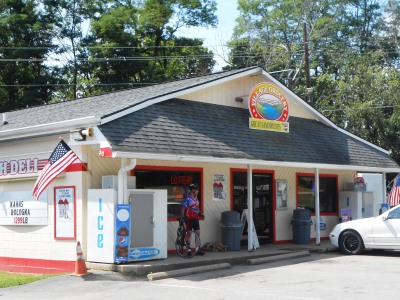 We kind of knew what to expect, but we were a little surprised at the quality of the food and popularity of the store.  The Village Grocery is exactly that—a well-stocked and good-sized local convenience store which also serves hot breakfasts and lunches with hot dogs, burgers, four types of soup, and overstuffed sandwiches.  We got there about noon and the parking lot already had several cars in it.  We parked on the street adjacent to the trail. 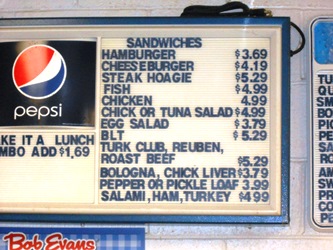 The menu is posted on the wall behind the counter where you enter. Be ready, because when they call “Next,” you need to order. There will be plenty of people behind you waiting their turn.  Patrons order at a counter along one wall, eventually have their paper-wrapped food handed to them, and then pay at a cash register.  There are lots of options including a special each day. Today’s special was meat loaf, mashed potatoes, and a vegetable. As good as that sounded, we weren’t interested in such a large meal for lunch. We both wanted the Rueben. Holding to the unwritten rule, we didn’t both order it.

George won the Reuben rights, and it came stacked high with corned beef. At $7.20 with a drink, it was plenty for his appetite. 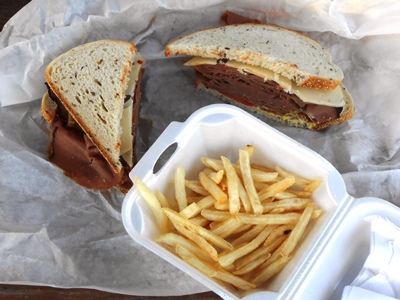 John decided on the roast beef deli sandwich with fries ($8.37).  Although there was a burger on the menu, I wanted to change it up a little, and since this is a deli I knew there would be a stack of meat on the sandwich. I wasn’t disappointed. With a good two inches of roast beef to start, I had a choice of bread, cheese, and garden products. I went with rye, Swiss and tomato, finished with mayonnaise and mustard, and a side of French fries. The food arrived quickly; the roast beef was good and there was plenty of it.  The fries were a little under cooked and not salted.  I probably would have been happier with some chips. I think anything on the menu would have been really good.

After getting your food you can either sit at one of the five inside tables or move outside to the three umbrella-shaded picnic tables.  Realistically, this is not an eating place for those wanting a sit-down, chef-prepared meal, but this certainly did not discourage the many patrons who swarmed the place at lunch hour; it actually was one of the busiest locations that we have visited so far.  Service was prompt, cheerful and efficient, but the emphasis was, understandably, on moving the large lunch crowd through as quickly as possible. 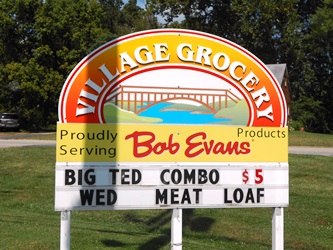 This is not the place to stop if you are looking for atmosphere, but it’s excellent for a quick bite at a great price. If you’re not looking for a full lunch or dinner, you can get a power drink and a snack to fuel up for the rest of your journey on the trail. George had conflicts with flies and bees, and he wasn’t thrilled with eating so close to their two dumpsters.  He gives the Village Grocery two-and-a-half bells.  John rates it three-and-a-half bells for its proximity to the trail, good food, and grocery-store convenience, making a three-bell average.