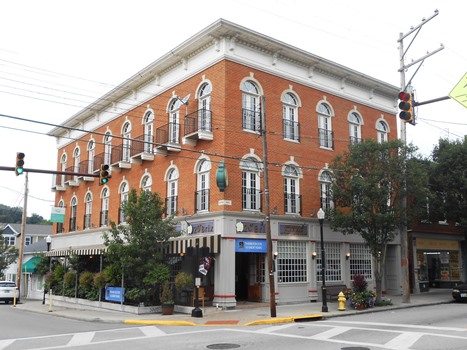 After researching 20 Brix in downtown Old Milford, we went in knowing this place would be fairly expensive, and value is definitely one of the criteria we look for.

In Old Milford your options for parking are either on the street or a small parking lot at the back of the restaurant.  Lunchtime is usually light enough that we easily found parking, but evening is sure to present  a challenge.  Walking up you will see a pretty nice outside eating area on the side of the building.  When you enter in the front there is a bar area in an elegant setting.  Not quite our style.  We prefer a more casual setting, and unlike at The Birch, which had a similar feel until our server helped to relax that, the service here didn’t help to soften the stuffiness.

Temperatures were in the 70s so we chose to sit outside.  We were soon joined by Rod Gossett and Pete Hostetter. We all scrutinized our menus, doing our best to ignore the street noise which hampered conversation in an otherwise comfortable outdoor venue.  The one-page lunch menu had a broad range of sandwiches and other choices, as well as numerous appetizers.  The common denominator was high price; most entrees ranged from $11 to $26.  The burger, always a good price-measuring stick, was $15.  No appetizers appealed to us, at least not at the listed price.  The spotlight is on wine at 20 Brix, and the list ran to seven pages.  Beer drinkers didn't fare as well; there was a one-page beer list, with only one offering on draft:  a Chimay Golden Ale for $10.  (Beer is cheaper at the ball park.)  John, Rod and George opted for less expensive bottled offerings; Dr. Pete prudently shook his head and stuck with water. 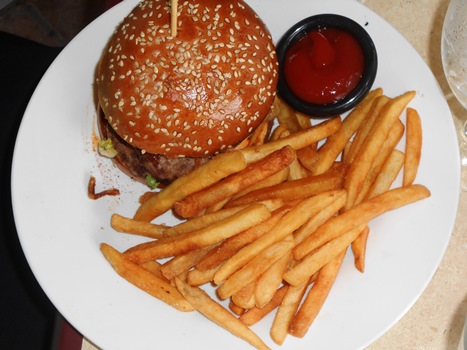 We have been to 6 places so far and I have had a burger in 4 of them.  This was the most expensive burger at $15, and it was the least satisfying by far.  On a scale from “McDonald’s” to “Wendy’s,” it was slightly better than McDonald’s, but not as good as Wendy’s.  At $15 I expected something special, but what I got was two premade patties, overcooked, with very little flavor.  It came with fries which were no different than what is served at the previously mentioned fast food places.  With prices like this I was expecting something better.  Service was so-so.  We were rarely checked on for a refill of our beers and for other needs.  Also, I was not asked how I wanted my burger cooked so it came to me well done, which is not the way I like my burgers.

Rod went for the Angus sliders at $12.  These were the first he had ever had, and he was unhappy with them.

My grilled cheese had its ups and downs. There was a thin slice of a rather tough white cheese inside with an unknown jam or sauce, perhaps orange marmalade. The bread had a nice crunch. Overall the sandwich was tasty but a little skimpy with the cheese. The tomato bisque was very good. Overall the meal was at or above average and the $12 price tag was a little more than I prefer for a biking lunch. 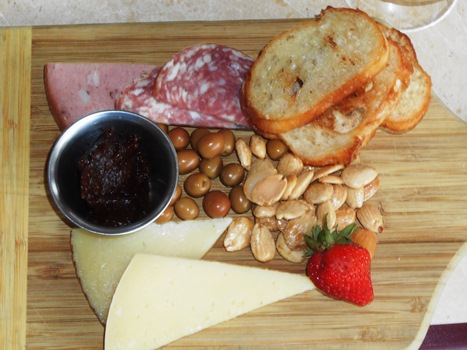 George is brief as he reviews his cheese and cold cuts plate at $16:

I was so disillusioned with this plate I declined to even finish what appeared to be a chunk of poor quality baloney.

To cap it all off our server, without asking anyone, brought just one check for the table. We all thought maybe George would just take it and pay for all of us, but no.  She did, however, upon George’s protest, provide us with separate checks.

To be fair, George and his wife had previously had dinner at 20 Brix, and it was a very positive experience.  However, Trail Taste Adventure is all about places that would appeal to trail users at any time of the day.  We are looking for value and an atmosphere that is casual and fun, and 20 Brix failed miserably.  Thus we are hard pressed to award 20 Brix even ONE bell.  This rating is a consensus of the four of us.  It takes into account price, service, menu, atmosphere and satisfaction with each of our meals.  For value and good food, there are better choices among the other places reviewed.