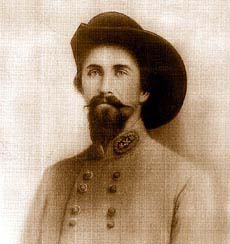 The first marker describes how a brigade of Morgan's Raiders attempted to destroy the Little Miami Railroad bridge at Miamiville. As they prepared to burn the bridge, they were charged by Lt. William Smith and 200 militiamen of the Miami Volunteers from Camp Dennison. 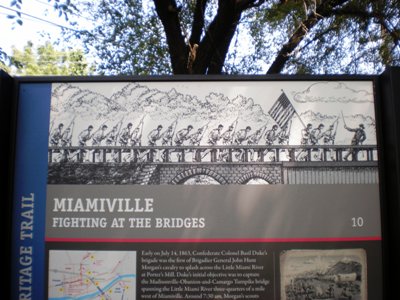 The ill-equipped Union militiamen held their line against the experienced Confederates in the resulting firefight until Union Lt. Col. George Neff arrived with a squad of convalescent soldiers who charged across the bridge with bayonets. The raiders retreated after a brief struggle, but they had lost 6 killed, 4 wounded, and 7 captured. The bridge was saved, and today the Scenic Trail bridge crosses the river on the same site.

A bit farther north on the trail, you'll travel the "Dangerous Curve" where that same morning a group of Morgan's scouts sabotaged a train carrying 115 new Union recruits to Camp Dennison. The engine derailed, and after evacuating the passengers, Morgan's men set fire to the cars. The Confederates marched the prisoners to a nearby house where Morgan let them go, but they had to walk the rest of the way to Camp Dennison. This incident is described on the second historical marker. 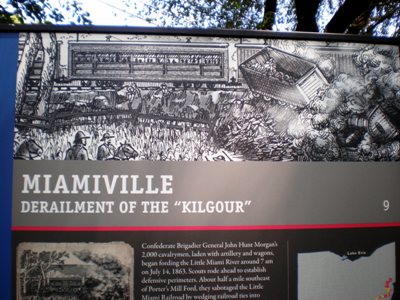 As area residents learned of Morgan's rampage through the countryside, many buried their valuables, explained Clermont County historian Rick Crawford. One woman hid horses in her parlor, knowing that Confederate gentleman would not enter a lady's residence.

The Miamiville markers are two of 56 on the John Hunt Morgan Heritage Trail that traces the Morgan's Raiders route through Ohio.