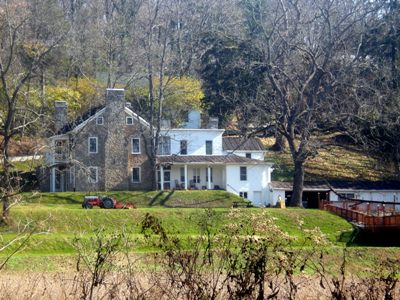 Hundreds of people ride through Warren County on the Little Miami Scenic Trail every day unaware that they are riding through land that was set aside to pay those who fought for the state of Virginia in the Revolutionary War. This land, known as the Virginia Military District, lay between the Little Miami River and the Scioto River; the amount of land awarded depended on rank and length of service, with 200 acres being the minimum.  Many who received land warrants had no desire to leave Virginia so they sold their claims. At the same time there were many Quakers in the South who were against slavery and wanted to live in a free state who were eager to buy those claims.  One such man was Benjamin Butterworth, a Quaker and abolitionist from Virginia, who sold his farm and slaves  in 1812 and purchased sight unseen the Sackville King survey that consisted of 1500 acres bordering the east side of the Little Miami River from Foster to Loveland in Warren County.

When Benjamin Butterworth left Virginia by covered wagon with his wife, Rachael, and their younger children, on September 25, 1812, it took twenty-five days to reach the home of his half-sister in Highland County, Ohio.  When Benjamin reached his newly purchased land in Warren County, he was shocked to find he had purchased 1500 acres of densely wooded land filled with steep hills, deep gullies and wild animals.   After assessing the situation, he headed to Waynesville to stay at the home of Zachariah and Polly Johnson who had recently settled there, as Polly was his oldest daughter. Not one to dwell on mistakes, Benjamin purchased 285 acres west of Waynesville on Caesar’s Creek for $3.50 per acre a week later and on November 10th settled the family on this land. 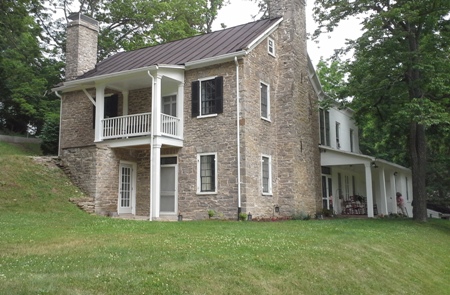 For three years Benjamin ignored his 1500 acres near what later became Foster as he was busy working his new farm and building a mill on Caesars Creek. Benjamin’s oldest son, Moorman, hated to see the land sit idle so he went down in early March, 1815,  to plant nine apple trees near the natural springs on the property and twelve peach trees on the river bank. Upon arrival he was surprised to find a squatter had cleared five acres, built a cabin, and planted a crop.  Moorman, who was 22, purchased the cabin and crop from the squatter and after bidding him farewell,   moved into the cabin.  Three months later, his older sister, Milly Butterworth Dyer, and her husband John Dyer, who had just migrated to Ohio, moved into the cabin with Moorman, and John and Moorman built a large two story log home for his family. A year later in 1816, Benjamin, Rachael and their five youngest children moved into this log home and the family began building a large house using stone harvested from the land. Completed in 1820, the three-level stone house which was built into the side of a hill overlooking the valley soon became a haven for new settlers, a meeting place for Quakers, and a place where abolitionists could make plans in secret—but most importantly, it became the southernmost station on the Underground Railroad in Warren County known as Butterworth Station.

For many years the Butterworths welcomed runaway slaves to Butterworth Station at all hours of the day or night.  Wet from fording the river, hungry from the chase,  and fearful of being caught, runaway slaves were fed, clothed, sheltered and comforted by Nancy and Henry Thomas Butterworth who lived with their children in the stone house with Benjamin and Rachael whom they cared for.  It wasn’t unusual for the older daughters to be awakened to help prepare food for the escapees and the younger children to wake up to find 20 slaves hiding in the basement.  It also wasn’t unusual to see several runaways hiding in the hay in the hayloft of William’s barn whose family lived on an adjoining farm. Benjamin’s youngest sons, William and Henry Thomas Butterworth, were the conductors of Butterworth Station and it was their responsibility to transport the runaway slaves to the next station which was Lebanon, Harveysburg, or Oakland in Clinton County. Sometimes they were taken by horseback or carriage but most often they were taken by wagon, hidden under sacks of sweet potatoes which the Butterworth’s grew on their farm.

Having a station on the Underground Railroad was stressful and dangerous as the Butterworths never knew when runaways would arrive or when slave owners or slave catchers would come looking for them. It took tremendous courage, sacrifice and a lot of quick thinking. Once when some slave owners arrived near suppertime, Nancy Butterworth immediately invited them to join the family for supper to give the runaway slaves in the lower level time to flee.  The book  Beyond the River, the Heroes of the Underground Railroad tells how Lowry Rankin needed to take a runaway to the Butterworths but was too sick.  In desperation he asked Calvin Stowe, his professor at Lane Seminary and husband of Harriet Beecher Stowe, to do it for him. Calvin had never transported a runaway so it was a real learning experience for him when he had to ford the Little Miami River in his carriage, and he returned to Lane Seminary soaking wet.  The Butterworths took great risks by sheltering and transporting hundreds of runaway slaves, as they could have been jailed and heavily fined if caught.  At one time William had a price on his head of ten thousand dollars, but since the Butterworths felt it was their sacred duty to help the runaways this didn’t hinder their efforts. 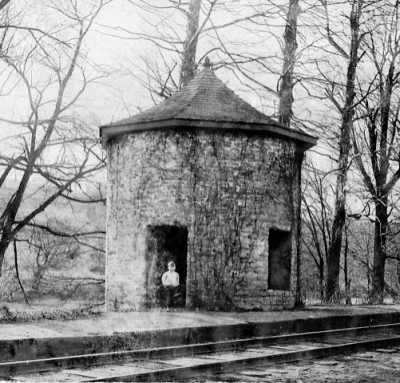 Around 1843 a different railroad came to Butterworth Farm. It was the Little Miami Railroad which was Cincinnati’s first railroad. It ran along the east side of the Little Miami River across Butterworth land and in 1846 reached Springfield. From the onset the railroad struggled financially, causing constant construction delays. Much of this was due to lack of support from the bankers and merchants of Cincinnati who lived on the west side and felt the railroad was of no benefit to them. Throughout the construction, Henry Thomas Butterworth stood by the railroad, generously donating the right of way across his land and donating water for the steam engines. He also housed workers and assisted with the grading during construction from Loveland to Foster to Morrow and from Xenia to Springfield.  For his overwhelming support at such a critical time, the railroad gave the Butterworths a stop on the railroad which was listed on maps and timetables and gave the family passes for their lifetime plus three days. A water tower was built with a waiting area near the tracks and pipes were installed to the tower from the spring house, making this an important water station for both the Little Miami and the Cincinnati, Wilmington, and Zanesville Railroad for many years.  At this Butterworth Station the family boarded the train, and a variety of products including milk, sweet potatoes, tobacco and grain were shipped by rail over the years.  At one time, a large chicken barn which still stands produced eggs and chickens for the Jewish community in Cincinnati.

Out of Benjamin’s ten living children, only William, who was ten when his family came to Warren County, received a formal education. Having this opportunity, William served as a public school teacher for forty years in addition to being a farmer and conductor for the Underground Railroad. Knowing the importance of education, it was he who planned the construction of Maineville Academy which opened in 1848 with Professor John Wilber Fisk Foster as Headmaster. John, who graduated from Kenyon College, roomed at the stone house and later became part of the Butterworth family when he married Henry Thomas Butterworth’s oldest daughter, Jane.  It was an honor to attend Maineville Academy and several Academy students went on to distinguish themselves, including Josiah and George Morrow, grandsons of Governor Jeremiah Morrow, and Charles B. Murray, son of Abolitionist Orson Murray. Of all the Butterworth daughters the most esteemed was Henry Thomas’s youngest, Caroline, who attended Antioch College in Yellow Springs, Ohio, at a time when it was rare for women to attend college.  Of the men in the family the most distinguished were Moorman’s son, Clarkson, who became a skillful surveyor and engineer as well as an outstanding writer and historian, and William’s son Benjamin Butterworth, who after becoming an attorney in 1861, served as Major in the Civil War, U.S. district attorney in 1868, Congressman for five terms, and U.S. Commissioner of Patents until his death. 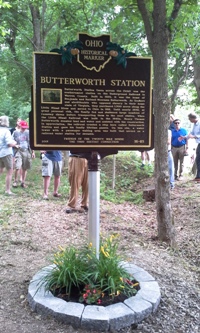 Benjamin’s son, William, didn’t attend Maineville Academy, but he left his mark on America after marrying Katherine Deere,  whose grandfather, John Deere, made farm implements. William joined Deere & Co. and took it to great heights with the introduction of tractors. In 1927 he was elected President of the U.S. Chamber of Commerce.  William and Katherine had no children, so in 1930 he donated his inherited land of 150 acres along the Little Miami River, upstream from the stone house, to the Girl Scouts of America for a camp which hundreds of girls enjoy every year.

Benjamin Butterworth died in 1836 and is buried in the family cemetery south of the stone house on the top of the hill with a simple marker with the initials BB. His stone house known as Butterworth Station on the Underground Railroad is still standing after nearly 200 years.  While it had a brick addition in 1845 and a barn incorporated into the structure, the house hasn’t changed much in the last 150 years. The house is still owned by Butterworth descendants and was recently restored so it can stand proudly for years to come as a symbol of hope for the oppressed and a memorial to the courage and sacrifice of the Butterworth family.

An Ohio Historical Marker was placed at the site of the Butterworth Station depot beside the Little Miami Scenic Trail on June 6, 2015, thanks to the Friends of the Twenty Mile House who received  permission from the Ohio Department of Natural Resources to place it on state land. On this marker is a picture of the water tower depot with a young child standing in the doorway. That young child is Thomas Butterworth Foster Jr. and the year was around 1920.  Thomas grew up to become a nationally known Presbyterian minister. When he passed in 2009, one of his dearest friends, Rev. Wayne Purintun of Morrow, gave the invocation at the dedication.

The new historic marker stands tall and proud waiting for those on the bike trail to stop and read about this incredible Quaker family that made this country better in so many ways.