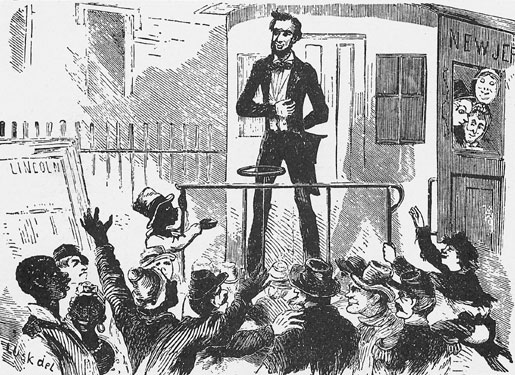 What are you thinking about when you bike the Little Miami trail? What daydreams are coming into your mind as you pedal the gentle curves and ever-so-slight inclines of the trail? As you look ahead, is it not easy to see a bend in the trail as a curve of railroad tracks bearing off ever so slightly to the right or to the left as the railroad follows the contour of the river? Now imagine a train with an engine and three coaches and let your imagination take you back in time to February 13, 1861. The train consists of a steam locomotive with coal hopper and three coaches carrying some very important passengers, one of whom will become the greatest president our nation may ever know. You are now sharing a ride with a man who will soon grow into near sainthood.

Your daydream has encompassed a small segment of President-Elect Lincoln’s 1,904-mile journey from Springfield, Illinois to his inauguration in Washington D.C. The journey began on February 11, 1861 when Abraham Lincoln departed his home in Springfield. He arrived in Cincinnati on the Wabash Line railroad on his 52ndbirthday, February 12. At 8:30 the following morning, Lincoln, his wife Mary and their son Todd arrived at the Little Miami Railroad depot located near what we now know as Sawyer Point, near the end of Eggleston Avenue.

The train departed at 9:00 a.m. and traveled the entire distance of the Little Miami State Park before arriving in Xenia. The passengers in the three coaches consisted of journalists, local dignitaries, and the Lincoln family. According to the New York Times, while the train stopped in Morrow, Mary Todd Lincoln was presented with a bouquet of flowers from the wife of the president of the Little Miami Railroad. Perhaps she was one of the dignitaries who rode this segment of Lincoln’s journey. The train traveled at 30 miles per hour and with short stops at Milford, Miamiville, Loveland, Morrow, and Corwin would have arrived shortly after noon that same day. Coincidently Corwin, Ohio is a small town on the river named after Thomas Corwin, a distinguished Warren County citizen and politician who would become a pall bearer at President Lincoln’s funeral in Washington D.C.

It is not likely that Lincoln made a speech at any of these stops, as none is recorded. It is likely, however, that he appeared on the rear platform of the train and he may have repeated a few simple words such as those he made at Xenia: “No speech to make, and no time to make one.” Or he may have said something similar to part of his Cincinnati speech, “I deem it my duty that I should wait until the last moment, for a development of the present national difficulties, before I express myself decidedly what course I shall pursue.” Or perhaps the few words he spoke a few days later in Painesville, Ohio, that ended in the phrase “I can only bid you good morning and farewell.”

As I ride my bicycle along the trail, I can’t help but look at the old telegraph poles, some still erect and some tumbling over, without thinking that these artifacts are the few remaining witnesses to the historic event I am sharing with this great president.