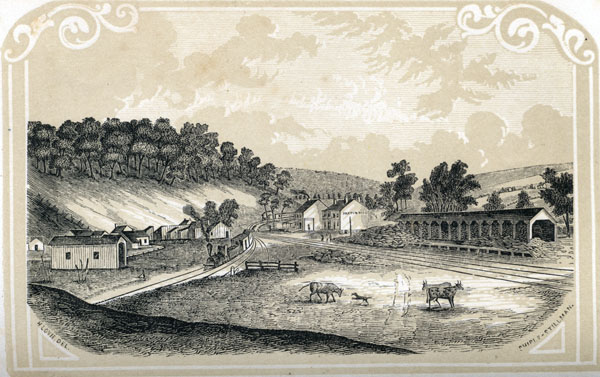 As we ride north from Cincinnati in our rail car, we’ve been enjoying glimpses of the scenic Little Miami River through the trees. The Guide describes our next stop:

“Loveland, 23 miles from Cincinnati, is an important station. Here is the intersection of the Hillsborough Railroad with the Little Miami Railroad. Hillsborough is 37 miles by rail, from this point. It is the county seat of Highland county, and a pleasant village.”

The Guide goes on to describe what is now Hillsboro, due east of Loveland, and the surrounding countryside that makes it “very healthy--and in summer a cool and agreeable retreat.” Founded in 1807, Hillsborough manufactured flour, carriages, and lumber. It also was the home of Eliza Thompson, who led groups of women into saloons to close them down in the temperance movement of the 1870s. The 1854 Guide informs us Hillsborough “contains about 2,000 inhabitants, with several churches. The society is cultivated and agreeable.”

But what of Loveland, where we are now stopped? Our Guide is brief, telling us that just three or four years ago, when the railroad first came through, “there was but a single house here; but now, there is quite a village grown up.” The Guide provides us an etching (above) of the location where the two rail lines intersect.

Loveland was named for James Loveland, who operated a general store and post office in the downtown area. The settlement grew because of the river and the railroad, and in 1872 a bridge was built across the Little Miami joining East Loveland and West Loveland. By this time the Hillsborough Railroad that connected here had become part of the Marietta & Cincinnati Railroad, carrying frieght and passengers east across Ohio.

In 1876 Loveland was incorporated as a village with fewer than 800 residents, but the population spiked in the 1950s, and Loveland became a chartered city spanning three counties (Hamilton, Warren, and Clermont) in 1961. After damage from devastating flooding in 1913 and 1959 (read here about the 1913 flood), a levee and channel were constructed in 1962 to reduce the possibility of another major deluge.

Today, the tracks of the Little Miami Railroad have been replaced by our scenic trail, passing right through downtown Loveland. The Marietta & Cincinnati tracks are still here, but the railroad was abandoned years ago. Loveland's growth in recent years has come in part because of what began as the "Loveland Bike Trail" and is now part of the Little Miami State Park's multi-purpose trail. Today Loveland has over 12,000 residents--almost twice as many as Hillsboro, the town more fully described in our 1854 Guide. It attracts the largest number of trail users each year, and many businesses cater to the travelers who come today by bicycle rather than on the trains of the past.

Below: The intersection of the two rail lines today [Google Earth]. The tracks were the old Hillsborough line; the trail is the Little Miami RR line. 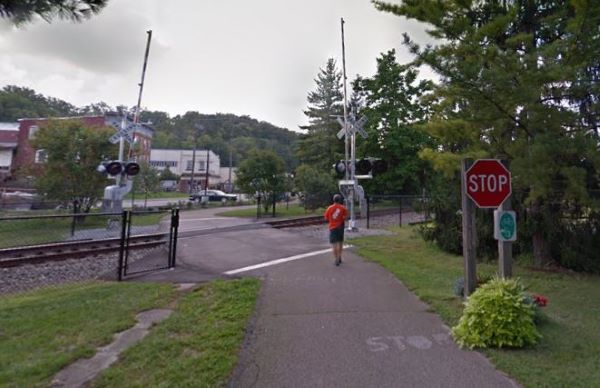 Below: 1860 mapshowing the Little Miami RR and the Marietta & Cincinnati RR intersecting at Loveland. The railroads ran parallel along opposite sides of the river for several miles after the M&C RR crossed the Loveland bridge and before diverging to take separate routes to Cincinnati.

Below: Vintage postcard of the Loveland depot after the Little Miami RR joined the Penn. RR 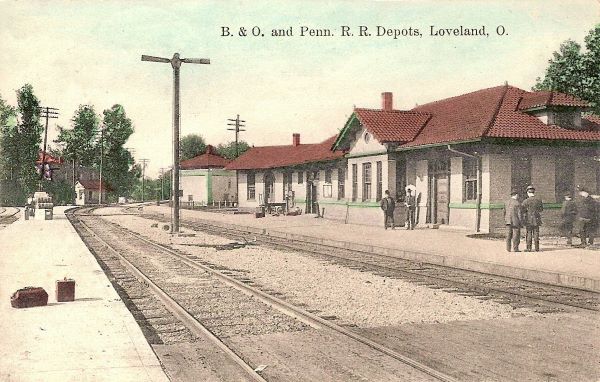