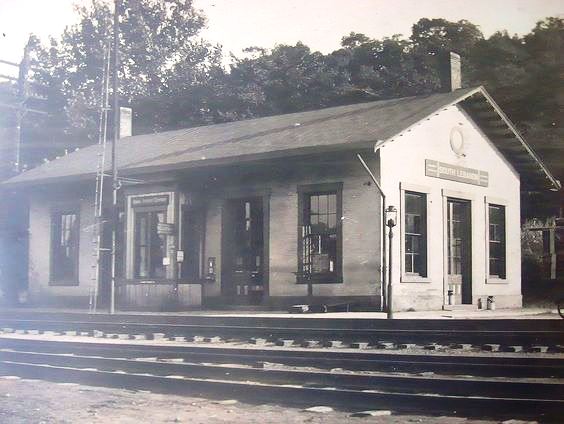 Imagine you’re cycling north on the trail from Fosters. Gradually you realize you are no longer pedaling, and you begin to hear a chugging engine instead of birds. A few other passengers in strange dress appear around you. You’re traveling on the Little Miami Railroad, and the year is 1854.

The train has just passed a bridge over the river on your left, and the conductor tells you that across the river is a place called Gainsborough, but it’s little more than a mill and a couple of houses. You realize that someday it will be the village of Kings Mills.

The conductor hands you a railroad guide opened to the appropriate page and invites you to learn about what’s ahead along the tracks. As the train rattles along through the trees, offering occasional views of the river, you read:

“DEERFIELD STATION. A bridge is thrown over the river here, and the old town of Deerfield is seen on the opposite side of the river; but is now only a few scattered houses. We say old; for it was settled about 1797, by the Suttons, Kelly, &c. Now fifty years in Ohio is as much as five centuries in some countries; a town which was settled fifty years ago is looked upon as among our antiquities.”

This early Warren County town, already “antiquated” in 1854, will later change its name to South Lebanon. The Guide suggests it has dwindled in size, alluding to the importance of the town as a stopping place for early settlers. Pioneers often left their families in the town while they worked on establishing their farms in the surrounding countryside.

Just a couple of decades after our 1854 journey, the town will grow again with the establishment of several corn-canning businesses, and Ahimaaz King, founder of King Powder Company, will stay here with his family while their new house is being built in Kings Mills. Later Corwin Fred will establish his mushroom company along the rail line, bringing families from Kentucky to grow and can the mushrooms. In the later decades of the twentieth century, South Lebanon will be best known for Duff’s Famous Smorgasbord and the memorable Kash’s Bargain Barn furniture store TV ads (be sure to watch one here)

In 2017 an Ohio Historical Marker will be erected beside the trail to proudly tell visitors about Deerfield, Warren County’s oldest town.

The train has stopped beside the Deerfield Station, and a few passengers get off. While you wait for the journey to resume, you again read from the railroad guide:

“LEBANON is four miles from Deerfield, and this is the station for the Lebanon passengers to arrive at and depart from. Lebanon is the county seat Of Warren County, the west side of which we are now traversing. It is noted -- perhaps as much as any other county town in the United States -- for its distinguished men. Among these, we may mention JOHN McLEAN, a representative in Congress, Postmaster General, and now Judge of the Supreme Court, who commenced his career in Lebanon, as editor of the Western Star. THOMAS CORWIN, Representative in Congress, Senator, and Secretary Of the Treasury, a distinguished orator, lawyer and statesman, whose father was one of the first settlers of Lebanon. THOMAS R. ROSS, representative in Congress, also an able man. JOSHUA COLLETT, the first lawyer in the county, and afterwards Judge of the Supreme Court; and Judge DUNLEVY. In fine, Lebanon and Warren County are rich in what Rome deemed her treasures - Patriots and Statesmen. Some, like MORROW, have gone to their rest; but it is hoped that the matrons of such a land may yet be able to produce plants of so goodly a stock.”

You’ve been to Lebanon on your bike, but not from Deerfield/South Lebanon. You’ve turned off before there, onto the Lebanon Spur Trail that forks from the Little Miami Trail a mile or so north of Grandin Road. But you don’t remember seeing any branch of the rail line between Fosters and Deerfield. That won’t come until years later. In this latter half of the nineteenth century, the matrons of the land will have to travel through Deerfield to get to Lebanon with their sons and daughters of goodly stock.

Photo: Fred’s Mushroom Products Company between Route 48 and South Main St., next to the old tracks. View looks northwest toward the river; just outside the lower right corner is South Main Street. The buildings were torn down later in the twentieth century. Where they stood is hidden from view by vegetation to modern trail users but visible on a satellite map.