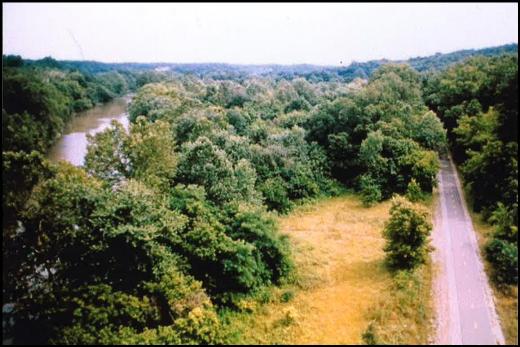 River and trail seen from I-275 bridge south of Loveland. Photo by Eric Partee, ca. 1990

It was a close-run thing.

- Winston Churchill, commenting on the Battle of Britain following the British victory

Well, Sir Winston, so was the Little Miami Scenic Trail. There were some “close calls” involved in converting abandoned railroad tracks into a first-rate multi-use trail; had these close calls gone the wrong way, it would have been much more difficult, if not impossible. For example:

Money, always in short supply it seems, was particularly tight at the beginning. Little Miami Inc. (LMI) had been deeply involved in getting the river designated a National Wild and Scenic River, and that gave it some credibility and stature.

LMI was the catalyst in setting up a pivotal meeting in Senator Howard Metzenbaum’s office in Washington. Also present were Senator John Glenn; Chris Delaporte, Director of the federal Bureau of Outdoor Recreation; LMI officials; and others. At the senators’ urging, Delaporte agreed to come to southwestern Ohio to evaluate the proposed scenic trail.

If that hadn’t happened, the trail might never have happened.

Delaporte was helicoptered from the old heliport on top of the Western & Southern parking garage in downtown Cincinnati, up the Little Miami following the river and the abandoned railroad tracks. He canoed a portion of the river and then he joined others on a couple of small railroad crew cars. At least for this stage of the trip we were joined by then State Representative Bob Taft, later Ohio Governor, and his wife Hope, both of whom were even then enthusiastic supporters of the Little Miami River and the trail. As the crew cars chugged into the Village of Morrow, we were met by the Little Miami High School Band and a terrific lunch laid out by the ladies of Morrow.

Mr. Delaporte was favorably impressed and decided to allocate $1,000,000 out of only $5,000,000 targeted nationally for the newly launched Rails to Trails initiative. That five million was for the entire country – and we got 20%!

One snag: the $1,000,000 in federal money had to be matched by donations or state funds. With the bi-partisan support of state senators and representatives, along with Governor James Rhodes, the Ohio legislature made the match. Whew!

If these things hadn’t happened, the trail might never have happened. And here’s a question for you: how many times have you heard of southwestern Ohio getting 20% – one buck out of every five – of the federal dollars allocated for the entire country? And another question: when is the last time we saw such a bi-partisan effort involving Democrats such as Howard Metzenbaum and John Glenn, and Republicans James Rhodes and Bob Taft and many others from both sides of the aisle?

Initially all communities along the proposed trail were supportive. But that sentiment shifted about 180 degrees in one of the bordering towns: Terrace Park, which opposed it. The Ohio Department of Natural Resources (ODNR) thus refused to purchase the last two miles of right-of-way between Terrace Park and Plainville, blocking trail development. To the rescue came Frederick A. “Fritz” Hauck, who with a generous donation to LMI made it possible to purchase the remaining two miles, which LMI later transferred to the Hamilton County Park District.

If those two developments hadn’t happened, the Trail might never have happened. 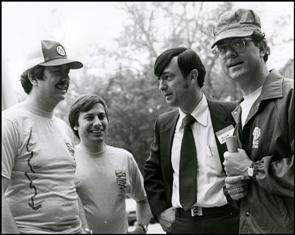 During this multi-year delay, LMI had to deal with a significant legal challenge over ownership and right of way issues from an adjacent property owner. It was fought out in the local trial court and the Court of Appeals. The case went all the way to the Ohio Supreme Court, which refused to overturn the earlier decisions in favor of LMI. Thus LMI won the last and final step, just as it had won all the earlier rounds.

And if that hadn’t happened, the trail might never have happened.

The first section of asphalt trail surface was laid down in late 1983 (13.5 miles from Loveland to Morrow) and this first section was officially dedicated at a public ceremony at Loveland in May 1984.

The trail was lightly used during this period. One result of light use was that some people were reluctant to use the trail because they didn’t want to be all alone out there. There were some bad things that happened on the trail, including physical assault. Gradually usage picked up and the existence of “the Loveland Bike Trail” penetrated the consciousness of more and more people, one reason being that the trail had one of the best advertising mediums ever invented: word of mouth.

Another factor leading to increased usage of the trail was told to me by Dick Higgins, another former leader of LMI: population growth in the northeast corridor out of Cincinnati brought in many more residents to this part of the area. More people living closer to the trail meant more people to ride their bikes or walk their dogs or run on the trail.

No story of this period would be complete without mention of the “Monkey Bar,” a tale also told to me by Dick Higgins. The Monkey Bar – its real name: the Train Stop – is located at the junction of the trail, the river, and the old 3C Highway.

The nickname Monkey Bar came about because it housed an animal, a chimpanzee actually. The chimp had learned to smoke and to drink beer, and it became quite proficient including mooching drinks and smokes from the customers. And after a while, it became somewhat addicted and was relocated to tobacco-free and alcohol-free quarters; the Monkey Bar ceased to house a “monkey.”

As with the Battle of Britain, the years of close-calls for our trail seem to be over; it’s here to stay. Further, it just keeps getting better. For example:

The future of the Little Miami Scenic Trail seems bright indeed. Isn’t it great to play on a winning team!

Special thanks to Tim Burke, Dick Higgins and Eric Partee for their help in putting this article together. More important, their contributions to the well being of the trail over the years has been considerable. Thank you, gents.