One of the services our volunteer organization provides to trail users and fans is the hotline. Throughout the length of the trail are signs that encourage users to call the hotline number to report problems, describe issues, or request information about the trail. Currently, there are three hotline volunteers who receive these calls (and texts) and attempt to respond to them. We try to address the issue (by, for example, sending out the chainsaw team) as soon as possible, usually in a day or two, and to let users know if the problem has been addressed. Spring and summer are of course the busiest times, and it’s usually predictable that if there’s been a big windstorm, the hotline will get lots of calls. 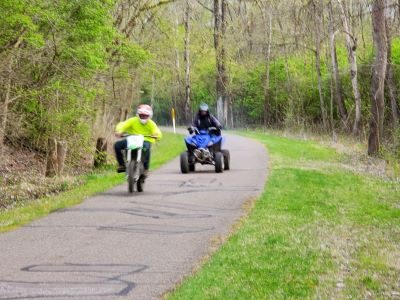 Probably 90% of the calls are about fallen trees or branches blocking the trail. When reporting problems, trail users are encouraged to include a photo, the closest Mile Marker, cross street, or other identifiable landmark. People also ask about where restrooms are, or report problems with malfunctions. They may ask about stops along the way, places to stay, or help with planning a long bike trip along the trail. We sometimes get reports about problems with dead or injured wildlife and occasionally wild and unruly humans riding motorcycles or four wheelers on the trail.

One caller asked if she could temporarily move one of our trail signs while her film crew shot a movie scene. Another asked how to donate a memorial bench in honor of a friend who had recently died. One rider wanted to know exactly how long the trail is. One trail user, who happens to work at the zoo, noticed a fallen hickory tree, and wondered if they could fill their truck with the hickory nuts to feed their elephants. And sometimes people ask us to resolve safety problems at busy crossings—things we would like to help with, but can’t always do.

Sometimes hotline calls at 7 AM are inconvenient, but our experience is that it’s a pleasure to support the trail and its community of users, and they are almost universally grateful and appreciative.

Trail Mail Quiz Answer: The hotline has not (yet) received a report of a raccoon stealing keys from a baby stroller.