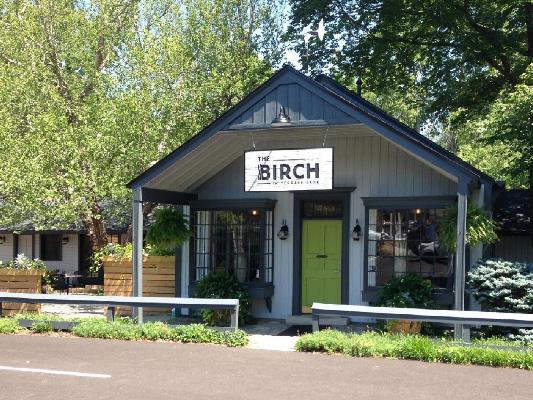 When the Trail Taste Adventure was conceived we didn’t plan to stop in Terrace Park; as far as we knew there was nothing but a Subway, and Subway did not fit our Taste Adventure criteria.  Terrace Park has always been a town you’d drive through at or under the speed limit but never had a reason to stop—until now. 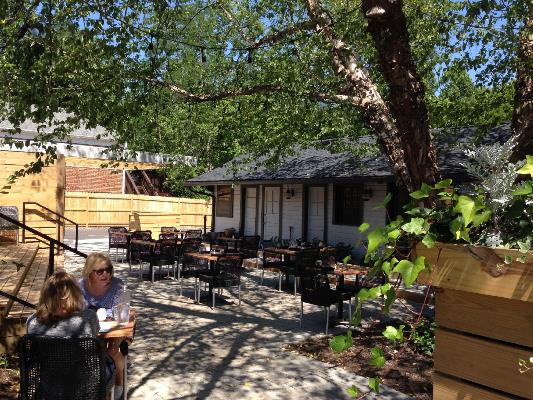 We welcomed summer with lunch at The Birch on Rt. 50, opened just ten weeks ago, according to manager/owner Aaron Tritsch. The Birch derives its name, we assume, from the full grown "clump birch" which shades the outdoor eating area in a cozy and secluded courtyard which also contains a full-size bocce court.  It’s just a quarter mile from where the trail crosses New Street in Terrace Park.  The closest trail parking lot is at the Milford Trailhead which is about a half mile walk, ride, or jog from New Street.  You can reasonably park, walk to eat, and then have a casual walk back to the car and burn off some of your meal.  If you’re coming from the south, it is about 2.75 mile from the Avoca Park trail access.  A considerably longer walk, but a nice bike ride.   Of course, The Birch also has its own parking lot.

My first impression of The Birch was “this isn’t my kind of place.”  It looked fancy and clean, almost too clean, and had ONLY ONE television that I saw.  Don’t get me wrong.  It was nice, really nice; but felt like you had to remove your ball cap and tuck in your shirt while you were there.  We were greeted before we even got to the door by our server, who made us both feel welcome.  Suddenly we realized she doesn’t care if your shirt is tucked in or not, she just wants you to have a nice lunch and enjoy yourself. 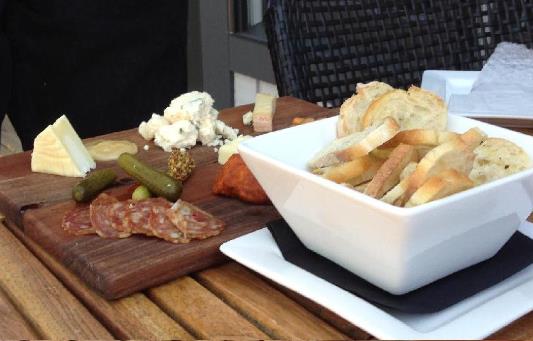 It was a nice day so we decided to eat outside.  The Birch has a great patio.  It kind of felt like some of the places at a beach resort, minus the sounds and smells of the ocean.  Road noise from nearby Wooster Pike is discernible, but not obtrusive.  The menu tends to lighter, healthier fare: salads, appetizers, sandwiches and vegetable sides.  There is also a daily soup which does not appear on the menu.  They offer a relatively broad wine list, as well as four beers on draft.  There were no fries, cheese sticks or fried pickles.

Interested in something a little different, George ordered the Charcuterie and Cheese Board for $16.  It had three types of cold sausage, three types of cheese, three pickles, two types of mustard, a pat of butter, a few spiced peanuts—and a bowl of French bread slices to go with everything.  All was enjoyed except the uncased red pork sausage, which was spiced just a bit heavier than George could handle.  (John, being made of sterner stuff, found it delightful.)  Service was prompt, professional and friendly.  With two pints of Loose Cannon IPA (@$6), George’s total bill was $29.96—plus tip. 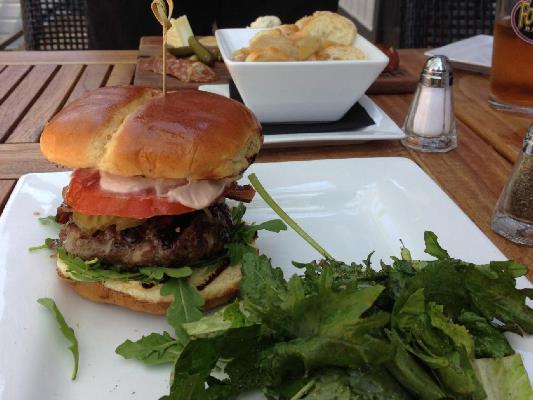 John chose the burger.  The server couldn’t be talked into including fries with that, but she did add bacon.  It came with a leafy, light salad, which was good (we know we should eat more stuff like that), but kitchen chips with Cajun seasoning would have been better.  The burger, ordered medium, was a good-sized sandwich with tomato, pickles, onion and their special sauce, which was not Thousand Island dressing.  You just have to pause after the first bite to feel the flavors and enjoy the moment.  The juices start dripping and then everything comes together for what might be the best burger ever. And mine was cooked perfectly medium.  WOW!  The only downside was another $12 burger.

While we were happy with the food, the beer and the atmosphere, we both felt the place was a tad pricey, and seemed to cater to more of an upscale clientele than the average, casual Trail user.  Maybe a few local softball teams and happy hour groups will start going regularly to give it a little attitude.  That’s really the only thing it is lacking, so we give it a 4 out of 5 bells rating.  Excellent food and a nice place; it just doesn’t have that “place-to-be” feel—yet.  Give it time. The Birch is definitely worth a visit.